I’m not a pool expert but I play one in my backyard.

I’ve seen them three times in thirty years and heard of dozens more.
Homeowner and handyman mistakes. This one was the least problematic.
The worst one could have killed me. I’ll tell those other stories soon.

When I walk near my pump my feet tingle.

It was a usual work day. I was doing regular pool maintenance stops.
My business phone was forwarded to my cell phone.
RING. RING.
Hello Back in the Swim how may I serve you?
Yes… my feet tingle when I get about six feet from my pool equipment.
OK. Is this something new?
Yes. First time I noticed it.

I took his address and told him I would drive there immediately.
I told him to touch nothing and do nothing until I arrived.
This could be a deadly situation.

I arrived in fifteen minutes.
The first thing that I noticed was there were two young girls swimming.
My new customer didn’t mention people were swimming.
Now it’s really bad.
I have an urgent problem that requires being very calm.
The girls were not complaining, that’s a good thing.
If they touched the hand rails all that could change.

I moved to where I could see the pool equipment and those girls.

I spotted the likely cause of the trouble instantly.

The one my new customer failed to mention during our call.

I told him to keep an eye on the girls and not let them move toward any hand rails or other metal.
I had my multi-tester in my hand. I walked near the system and sure enough foot tingle.
I pushed one probe into the earth and touched the other to the house ground at the breaker box.
Forty volts AC.

I sent him to kill the power while I kept an eye on the girls.
I knew this repair wouldn’t take long.
When he returned I asked, “did you just install this?”
Yes I did.
Did it run?
Yes it did.
Did it start real slow before getting up to speed?
How did you know?

While we talked I had opened the motor to see how this could have happened.
The two hot wires and the common all wrapped in red.
Without marking or the use of a tester you could not guess which was which.
I disconnected them all and sent him to turn the power back on.
The motor was set for 220 volts and we had that.
I reconnected the wiring as required.
The motor now started promptly and no tingles.

He had swapped one hot wire with his common wire.
I doubt that the stray voltage was traveling much beyond the tingle zone.
Just another day at the office.

Friday is my favorite day.

This site uses Akismet to reduce spam. Learn how your comment data is processed. 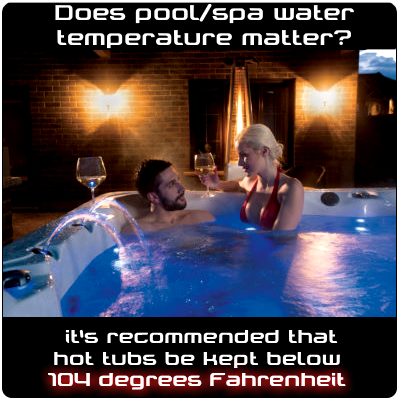 Lowers both pH and Alkalinity.
Sodium Bi-Carbonate or Baking Soda

Raises the total alkalinity & pH.
One pound raises T/A by about 7-8 PPM ( parts per million)

The information on SplashBits is for educational purposes only.
It is not a substitute or replacement for manufacturers recommendation, instruction or information.
Consult with your local building code department, or swimming pool or hot-tub professional.